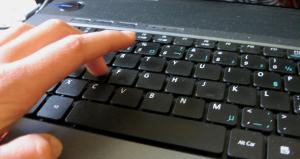 Blogging is a funny thing. Many times I’ve poured thought into some topic, feeling like a post about it really needs to get out there. That this little thing I’ve noticed about the world around me has got to be noticed by other people too. Then – nothing. No reaction from the internet at large. But when I`m running short on time and I have no ideas for what to post, when I quickly surf a couple sites and stick up a random link to write about…. well, then I am flooded with more comments than I expected. Really, the amount of thought and effort I put into a blog post doesn`t seem to be apparent to the majority of readers.

Which could tempt me to slack off. I could just whip up random posts at the last second on a regular basis, instead of just during exam periods or other hectic times. The blood, sweat and tears of a writer does not seem to inevitably show up in between the lines a writer produces, so why bother sweating at all?

Well, because being a contributor to the infinite stream of information poured into the web each day comes with responsibilities. (Fun fact: did you know there more video uploaded to Youtube…) 99.9% of this thing we know as the internet is complete garbage, but that doesn’t mean people don’t rely on what looks less like garbage than most.

I really didn’t believe, when I started blogging regularly, that I’d get more than two or three people reading this. And while I’m nowhere near those superstar bloggers who’ve somehow turned their blogs into book deals, I still have more readers than I imagined I’d have. Which scares me at times. I was never nervous about blogging at first, despite seeing hundreds of bloggers complain about writers’ block and nerves before pressing ‘publish,’ because I really thought my blog would get buried somewhere in the internet. You know, not so buried that I could write inflammatory stuff without consequences, which I would never dream of doing, but buried enough that I didn’t have to worry about what people thought of my writing.

(Interestingly enough, I have far worse nerves when submitting something to be published somewhere, because print tends to be taken as some sort of canon. I’m scared of rejection, of course, but more than that I’m scared I’ll write something and get it published, and realize I phrased something in such a way that it does not sum up the truth of my thoughts at all. That I’ll mislead people from the truth – crazy fears, but writers’ fears do tend to be crazy.)

But I have ended up with a tiny little platform to shout from, and I should consider what I use it for. I don’t think any platform, however tiny, is too small to be worth caring about. If you’re telling stuff to merely half a dozen people, you still have to think about being accurate, and how what you say will affect them.

It’s not just getting facts right, though that’s horrifically important (and I’d rather have a mistake pointed out to me than wrongly inform whoever reads this). It’s the fact people sometimes relate to what you write. Or you shared a link that started a lot of thought-provoking conversation – I have this more often with facebook, which makes me aware I should be careful what I post on my timeline. It’s easy to stir up the controversy, but is it productive or worthwhile? Or maybe someone comes to you later and tells you the link you shared really helped them think a different way about this-and-this situation in their life, which is scary. It scares me to think of some little thing I have ever written in my life could send another person bouncing off in a completely different direction, like some internet form of the butterfly effect.  Not that I can flatter myself that I have that much power, but the smallest possibility that I could is nerve-wracking.

Because it’s easy to throw up post after post, link after link, without thinking about the way it could impact others. But in reality, each one of us actively sharing stuff online are almost like mini-Googles, filtering the web for the interesting bits. Except our biases and failings are more our responsibility than an automatic computer program.

Fortunately, I have never insisted I was an expert, which means every single one of you is free to disagree with me.  You’re free to tell me if I’m stirring up controversy for no reason, or if all I share is irrelevant time-wasters. You’re free to take what I say with a grain of salt, and I’d prefer it if you do. After all, I’m just trying to write about living, which is something we all go through.