Fanfiction: For Geeks Only?

Or, What I Learned From Writing Fanfiction 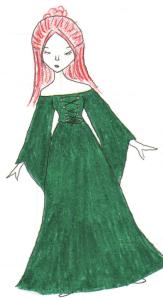 Ginny Weasley – as my 15 year-old self drew her…

So, now that I’m looking back over my looooooooong career as a fanfiction author (just kidding) and wondering whether it was a useless exercise. After all, when I look back at some of the drivel I posted on fanfiction.net, I cringe. And it’s not like I could ever get recognition or money for that stuff – it’s frowned on to swipe characters from other authors.

But I’ve come to the conclusion that it did make a difference in my writing after all.

After all, it did enable me to try some ridiculous stuff I never would’ve tried in my “serious” writing. It allowed me to be as sappy, mushy and sentimental as I wanted. Once you’ve tried writing the extreme, it’s a little easier to scale back and be more realistic. Also, it helps you experiment with aspects of your writing without worrying about characterization. Practice on one area at a time. Sometimes that’s helpful for a writer.

Writing fanfiction is a bit like playing house when you were a kid – you have a set of stock characters (the mom, the dad, the baby, etc.), and a certain setting, and a certain set of events that are more likely to happen – but as a kid you have complete freedom to let you imagination run wild within those bounds. Before you know it, you’ve played for hours.

Another point is, people read fanfiction. When I went back recently to check my old fanfiction account (that I had not updated since I was in junior high), I was amazed to see it still got one or two hits a day. And I hadn’t updated in eons by internet standards! So I posted a little something new, to see what would happen, and I got over eight hundred hits in a day. Needless to say, that’s higher than I get on this blog.

Besides, people leave comments and reviews, and though lacking in constructive criticism (it’s mostly “I like it! Keep writing!”), it boosts your confidence. It forces you to actually write another chapter. Recently it dawned on me that a writer is not really a full writer without readers (which is one of the reasons I am updating this blog more often).

Yeah, so call fanfiction writers lame and geeky if you want. It’s a bit of a weird hobby. But it’s a ridiculously engrossing and incredibly fun one.

6 responses to “Fanfiction: For Geeks Only?”