Tag Archives: the other side of the story

The Other Side of the Story

Why We Need Literature – To Tell Us Both Sides 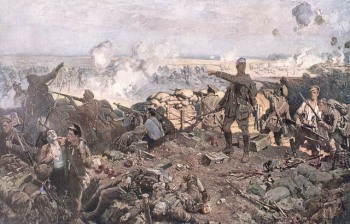 It’s easy to hate people. How on earth can they think the way they do? What on earth would motivate them to do that? People’s minds are a mystery to us, especially if they’re our enemies. Obviously we have a good reason for whatever things we do, but they just do it because they’re pure evil, don’t they? At least, so we’d like to think till we hear their side of the story.

Good literature is one way to hear the other side of the story. It’s a way of putting yourself behind the eyes of others. And it’s far more subtle than being lectured at or forced to read a dry history of each side.

I first experienced this reading All Quiet on the Western Front. It wasn’t the sort of book I normally read – war fiction still isn’t, unless it’s highly recommended – but I found it on my mother’s bookshelf. I got at least a quarter of the way into it before realizing the characters’ point of view was that of the German soldiers in World War I, not the British as I had thought when I’d started it. (Yes, the book is famous, but I was young enough not to have heard of it before when I read it.) I was astonished “our side” was the side pouring poison gas and shelling the main characters. After all, wasn’t poison gas the nasty, sneaky biochemical weapon the Germans unveiled despite agreements not to use such barbaric things? If the British, Canadians, French, etc., all agreed it was so nasty, why on earth would they start using it themselves? (Incidentally, the Canadian have a whole mythology (somewhat based in fact, of course) surrounding the Second Battle of Ypres. The Germans released 160 tons of chlorine gas, which caused British and French defenses to crumble – but the Canadians staunchly held the line in the face of devastating casualties. This determination thus taught the world exactly what it means to be Canadian.) The answer to my question, of course, is pragmatism. You don’t win wars by being more virtuous than the other side, no matter what your propaganda is telling your people.

On top of all that, the book really shows the point of view of an ordinary German soldier – they were as sick of fighting as anyone, but because of decisions of their superiors, the war went on. One character in particular suggests all the high-ranking government officials who wanted this war should get into an arena and fight each other, without involving ordinary citizens in the misery. This shows the stupidity of taking an official policy of, say, Communism or the Taliban, and imaging every single person on that side believes in it and is fighting because of it. Sometimes the situation is far more complicated than that.

Another book that showed “the other side of the story” was Gone With the Wind. I admit, I read it because it was supposed to be a famous romance, not because it had anything to do with the Civil War. Up until then, all I knew about the Civil War was bits about the North being opposed to slavery and smuggling slaves to Canada (I am Canadian, after all). I had never considered the Southern point of view. Now, this book is controversial in how it portrays the “happy slave” stereotype, and in its somewhat sympathetic portrayal of the Ku Klux Klan. That’s not what I mean when I talk about the other side of the story (though it does reveal patterns of thought that justified these things) – what I mean is that it showed me that in war, the North was just as brutal as the South, and their victory set forth a whole string of problems for survival for people such as Scarlett O’Hare. At the very least, it is one example of how those in the South viewed the Civil War. But more importantly, it points out that no matter how “right” one side is (ie: not supporting slavery), doesn’t mean every action of that side will be sunshine and roses.

One last example – Hiroshima. This is a book by a journalist who interviewed several people after the nuclear bomb was dropped on Hiroshima, and followed up these interviews forty years later. Of course I’d learned about the nuclear bombs from our point of view, about how they were necessary to keep the war from being prolonged, etc., etc. But that doesn’t negate the fact that this action had a huge effect on ordinary citizens going about their lives. Reading about the confusion, the resulting chaos, the lasting radiation sickness and so on, you can never forget that the bomb affected individuals – it won’t let you hide behind the “a million is just a statistic” trope.

This means that while books are a very important tool for understanding each other, they are also a dangerous tool. After all, fiction can twist a point of view until almost any belief can seem right. I think there’s a reason I’ve never read a book from Hitler’s point of view, and I don’t think writing such a book would be at all productive (unless the message was to point out how wrong he was). But I think that advantage here is that books from the other side of the story reflect back to us ourselves – the way we appear in other people’s eyes. They make us unable to avoid seeing ourselves as just as unjust, nasty and brutal as we think the other side is. This is necessary because only if we know our faults can we change them. We need to know we’re just as capable of evil, if pressed. If we wrap ourselves in a cloak of self-righteousness and justification , we’ll be forever wondering why they hate us.

Literature: a powerful force to be wielded responsibly.

Filed under All Quiet on the Western Front, Gone With the Wind, Hiroshima

Tagged as All Quiet on the Western Front, evil, gone with the wind, Hiroshima, the other side of the story, World War I