How to Learn Languages

Why do we do it wrong? 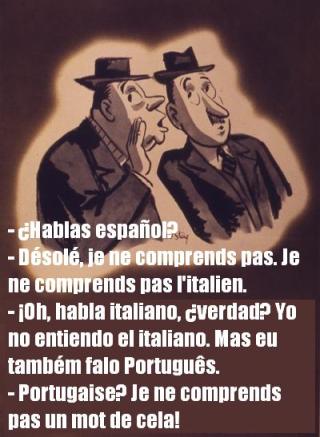 Knowing another language is a “good thing.” People love to emphasize this to the kids complaining about having to learn French/Spanish/whatever in school. Languages have frustrated and confused travellers and students ever since the Tower of Babel, and being able to communicate with other is always a useful skill. It makes you look sophisticated as a writer too, if you’re always inserting foreign phrases in your dialogue. However, you really want to know what you’re doing with this, or you could end up looking like Dan Brown, whose French and Italian in the Da Vinci Code is reportedly atrocious.

One major problem, as I see it, is that it is far too easy to go to a million language classes and never pick up the language at all.

The Problem, A Solution

This problem is especially obvious in Canada. Ever since our lovely Prime Minister, Pierre Elliot Trudeau, decided it would be nicer if everyone in Canada could speak both English and French, kids all over Canada have been given French in school. Our cereal was re-labelled Corn Flakes/Flocon de maïs, and our teachers promised us the possibility of a cushy government job if we ever mastered the language. Despite this attempt at immersing the country in bilingual labels, almost no one I know can speak French. Why is this? Because out west where I live, setting eyes on someone who speaks French is about as common as sighting a blue heron. It can happen, but not often.

See? The key to actually learning a language is using it.

Another example – in university, large numbers of students take Spanish because they never did manage to learn French in school, and the university makes you take upper-level French courses whether you actually absorbed any French vocabulary in your highschool days or not. Despite this, no one can speak Spanish either. I am currently taking Spanish, and the problem I see is that it consists mostly of equally clueless students talking to each other in broken sentences, interrupted by long English passages of, “is that right? I don’t know” or “What’s the verb conjugation for ‘estar’ again?” Which means, of course, that even though we use more Spanish in class than in we used French in French class, we’re probably just perpetuating each others’ horrible pronunciations and mistakes, because a professor with thirty students doesn’t have time to make sure each student has it right.

Then, by contrast, take my mother, who as a good little European, learned German, French, English and Dutch in school. She is by no means fluent in all of them. But the ones she had to actually use, she knows more of – meaning she could actually speak a little English before moving to Canada. In Europe, you’re far more likely to run into a German or French person who can’t communicate with you, than you are in North America. And then you actually use the languages you are supposed to know.

Now, it would be ridiculous to suggest that no one can learn a language unless they know someone who speaks that language. Instead, what you have to do is find ways to make up for the deficiencies of your environment. Languages are learned best in some sort of context, so you have to create that context. Language recordings help, because you actually get to hear the language and not just your mangled mispronunciations of it. Music, TV shows and Youtube videos are great too, even if they’re incredibly difficult to follow at first. (If you do enough searching on Youtube, though, you can find songs with only about four lines, and the English subtitles underneath, if you really need too). You really need to decide what is important enough that you want to say it, and then figure out how to learn to say it. You may not, despite how many classes teach you this, actually want to describe your dog or your summer vacation in this new language. Maybe you’d rather know how to catch a bus, find things in a grocery store, or understand the vague directions to the nearest hostel. Or maybe you just want to write Spanish poetry, I don’t know. Start with what’s useful to you. Then, of course, you have to commit to putting enough time in every day using it, until you’ve actually got another language stuck in your head. The key is using the language, even if it means a lot of talking to yourself.

Language classes all too often are completely unrelated to the context of your life. When you walk through that door you speak Spanish, when you walk out you don’t think about the language again until you have to do homework. They love to teach you what everything in the classroom is called, and other long lists of vocabulary that is completely useless to you (when are you going to say ‘overhead projector’ to someone in Spanish?), but when you create your own context you decide what words you need to know. Not to say you can’t learn a language in class, because obviously people do. But, equally obviously, people don’t, too.

I’d say going to another country that speaks the language you are trying to learn is incredibly useful, because you’re surrounded by what you’re learning, and you’re always in context. However, it’s better to have a basic grasp of the structure of the language before you go, to prevent drowning in the language the first couple days you are there. It’s easy to show up with big goals and get absolutely overwhelmed at understanding nothing right away.

Most of all, I’d say that while printing off long lists of random words with their translation beside them, and memorizing them all, will teach you the language eventually, it’s not incredibly efficient.

Despite my endless list of problems and advice, I have to say that learning languages is fun. Obviously, I already am a person who loves words. But getting a whole new set of words to express your thoughts in – is there any greater excitement for a writer? Even if it makes you feel like you’re in kindergarten again!

Have you tried to learn a new language? Any tips and tricks that helped you?

As a side note, here is a video of some guy in England who absolutely astounds me by having mastered eleven different languages. I have so far only mastered a handful of words in three languages, and am completely un-fluent in all three. He insists, of course, that it gets easier the more languages you know:

How Do You Become Fluent in Eleven Languages?

No language is justly studied merely as an aid to other purposes. It will in fact better serve other purposes, philological or historical, when it is studied for love, for itself.

I’m thinking this is true, as my Spanish and Portuguese “fluency” languishes… It’s tough to learn languages, and I like doing it. It must be harder if you hate it and only do it because someone tells you it will be useful (as thousands of Canadian schoolchildren are told each year as an explanation for why they are learning French). Knowing languages is probably a useful skill for writers too, so that the foreign phrases they insert are grammatically correct – as well as teaching us what un bon mot means. But if you don’t enjoy it, you might not get far.

Anyway, I’ve probably just hit the bottom for this semester, and that may be a reason for my lack of progress language-wise. It’s sad – I start each school year fresh off vacation and full of confidence, which always evaporates by November. But I always do survive. 🙂