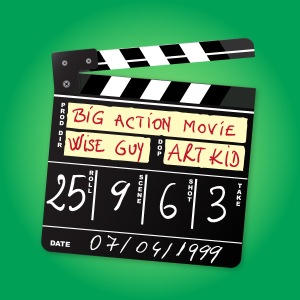 Writers like to experiment. Sometime we try new points of view (this post points out a new trend). Sometimes we try a new genre (see Soldiering Through the Writing World’s post on this). And sometimes we try something completely different – like writing a script for an online video.

That’s what I ended up doing last spring. And it was a huge challenge to translate what people would see into words. I went through dozens of drafts before one was finalized, and ran into a few challenges:
Challenge 1: New Format. Like I said, no written descriptions, except for the visual cues to the director that tells them where you’re setting the scene. And you can’t say, “Bob looks mad,” you have to say what people would see – “Bob crosses his arms and furrows his brow.”
Challenge 2: Budget. Yeah, when you write a novel you can choose the most elaborate setting you can think of and it makes no difference to how much your book costs. In video, the more complicated your setting it, the more the video costs. This caused the first sets of my drafts to be thrown out – too many settings that would be difficult to find.
Challenge 3: The Skills and Talents of Your Team. Writing is usually a solitary pursuit, but when you make a video you need lots of help. In this case, none of us were professional filmakers in any sense of the word. So any script that called for incredible acting skills, complex direction, extreme editing skills… well, it just wouldn’t happen. Not to mention we had time constraints too.
In the end, the voiceover used in the video was almost word-for-word what I had written in my script. It was so much fun to do something really different with my writing skills, and I was glad I had been useful in some way. Plus, I had a great team. Here is the finished product:
By the way, this was a video to advertise a contest on university campuses in Canada. The point was to get people to think about what they really wanted most in life.