How to Establish Your Fame Forever – Exemplified by Ovid 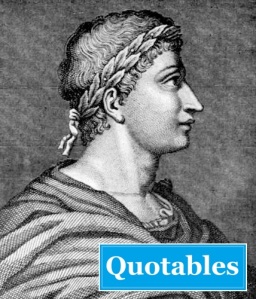 Wherever through the lands beneath her sway

The might of Rome extends, my words shall be

Upon the lips of men. If truth at all

Is stablished by poetic prophecy,

My fame shall live to all eternity.

– Ovid, Epilogue to the Metamorphoses

Well, Ovid, here I am reading your words two thousand or so years after you wrote them. And my Classics prof did describe you as perhaps one of the most important of the Latin poets (excluding Virgil). So is that the secret, then – declare your greatness loud enough until everyone else believes it? If that is, I should start ending off each blog post here with ‘by Harma-Mae Smit, her words shall be read for millennia.’

The Metamorphoses, in case you’re not a Latin scholar, is sort of a summary of all mythical tales of Greeks and Romans from the beginning of the world till Julius Caesar dies. I did enjoy reading it, especially when I came across a story I already knew because people told it to me as a kid (like Dadedalus and Icarus), though they never told kids Ovid was one who helped make the tale famous. It really helped me piece some of random Greek mythology together. So that much I enjoyed.

The one drawback is – did it really have to include women being kidnapped and assaulted by random gods and powerful men on every other page? I seriously spent a night dreaming of being kidnapped, and I don’t think that’s the emotion the poem was supposed to raise in me. It made me truly thank God, though, that I was not born a helpless woman in Ancient Greece.

Besides being a writer and a lover of books, I love history. It’s sad no one knows any history, and worse that no one teaches it (I do not count ‘Social Studies’ as history). On top of that, the little history people do seem to have absorbed is usually 1.) a long line of progress that produced us, or 2.) a reason to feel superior to everyone who came before us. Both of which are horrible misconceptions. Here’s why:

History s a Long Line of Progress, Marching Straight to Us

Yep, here’s where our selfishness shows through. Our society’s pretty great, and obviously a bunch of history stuff happened before we existed. So all of history led up to us, right? If we look back we can see what people did that made us the way we are.

As if history existed just for us, as if Newton was coming up with calculus because he knew how important it would be to the future, as if the march of technology has all been merely to bring us computers. News to self-centered us – history does not exist merely for our sake.

And linear! As if history was ever linear! The only linear thing about history is that it occurred in time, which we generally agree only marches one way. But to describe the events as linear is crazy. About a billion things happened at the same time back then, just as it still does today, and every little thing affected every other little thing in a multitude of ways (you know, like the butterfly flapping its wings theory, except we’ll never know how many butterflies existed in the Middle Ages). And as if it always progressed to modern times! Did you know they had a steam engine in Alexandria in the Roman times? Or that everyone around Athens thought the idea of democracy was scary “mob rule” (and indeed, the Athenians did overwhelming vote to murder all their generals at one point, so there may’ve been some truth to that).  History starts to look not so much like a march of progress, but a snarl of events.

Let’s talk about scurvy – everyone knows sailors used to drop like flies from this disease, until one day someone experimented with citrus juice. And who knew, drinking the juice kept away the dreadful disease, and scurvy never plagued mankind again. Except it did – through a combination of factors, what we’d call ‘progress’ in history (the discovery citrus juice prevented a disease) was ignored, and they came up with a theory that explained scurvy came from a mythical product called ‘ptomaine’ in tainted meat. (The full, well-written account of scurvy and Vitamin C can be found here.) Clearly, history does not always move forward. Or in a straight line at all. And simplifying history to a line usually ignores the context completely.

Take a simplistic look at the history of astronomy – Copernicus put the sun in the center, Kepler added elliptical orbits, Newton added gravity to explain why the planets go around, and eventually we ended up with the theory of the solar system that we all know and love today. Let’s just ignore the fact Copernicus put the sun in the center because he was obsessed with circles and wanted to find a way to make each planet’s orbital circular. Or that the theory he came up with was just as accurate as assuming the earth was in the center, like everyone did before. No, Copernicus was ‘progressive’ because his theory agrees with the theory we have today, whereas everyone else was ‘ignorant’ because their theories don’t. Let’s completely ignore that from the point of view of people at the time, there was absolutely no reason to view one theory as better than the other.

When we look at history from where we’re standing, it’s incredibly easy to cherry-pick events and make a nice chronology that explains exactly how we got here. It’s easy to demand people in the past see their world in the same way we see our world today. And to laugh at them if they don’t. Because…

People From the Past Were Stupid (of course)

People, like, used to knock rocks together in their caves or something, right? You know, until they accidentally discovered fire or something. And they used to slice people open to let out all their blood when people got sick, so they must’ve been stupid. It’s pretty obvious blood-letting just weakens people, not makes them better.

Or, maybe people were exactly as intelligent as you or me, and were just a product of their time? After all, we might believe stuff about the world that will be proven wrong in a couple decades, but we wouldn’t accept that as a reason for why we’re stupid. And it’s true, not everyone flat out says they think people in the past were stupid, but every time someone comes up with a list of things people used to believe and laughs at it, I really wonder if that person would’ve believed anything different if he lived back then.

The most obvious example of this is the flat earth myth – the idea people in the Middle Ages thought the earth was flat. As a kid, I myself was told by trusted teachers that people thought Columbus was stupid for sailing west, potentially off the edge of the earth. This is a wonderful story – people were stupidly petrified of sailing out of sight of land, but one brave soul sailed off into the blue and discovered the land that became the wonderful North America that we know today. But no, actually, Columbus was not blindly sailing west in the firm belief he was right and everyone else was wrong about whether the earth was round. Everyone knew the earth was round already! The Ancient Greeks knew the earth was round already! (As I said before, the Greeks seem to have thought of everything first.) Really, the real reason this myth gets thrown around is because then people get to paint the Catholic church as the obstinate villain again, angrily insisting that no matter what the evidence was, the earth must be flat. (In reality, there was pretty much a consensus on the earth being round by the 14th century).

Interestingly enough, Columbus did disagree with everyone else on something, and he actually was the one who turned out to be wrong. He sailed west because he thought the circumference of the earth was far smaller than everyone else did, and so he was sure he would quickly hit China or India. Which is why, of course, he was so convinced that the islands he landed on were part of India, and no one could convince him otherwise even though he sailed there four times himself and couldn’t find a single thing that resembled Asia or India.

The myth that people in the past were stupid is attractive, because it makes us feel smart. And it’s a pretty easy myth to gather evidence for. After all, the people back then didn’t have computers, did they? If they were so smart, why didn’t they invent a computer, huh?

Okay, I’ll send you a couple hundred years back in time, and see if you can come up with a computer all on your lonesome. You’ll already be several steps of everyone else back then, because you can conceptualize an idea of a computer, and possibly have some idea of how to put one together. Still – good luck, without an electrical grid. Hopefully you can figure out how to find silcon.

Which brings us to our last point….

This is not a myth – History occurs in context. Always

The Roman Empire had tons of people to keep in line. Tons of freshly conquered, restless people who were sure to make trouble if they weren’t kept busy. You think the Romans were looking for easy, labour-saving devices?

Not to mention Heron’s steam engine was apparently viewed as more of a toy, making it a bit harder to think of further uses for the thing. After all, when was the last time you looked at – I don’t know, Tickle-Me-Elmo or something – and wondered how you could convert it into a productive mechanism for helping society?

Which brings everything back to context – people allowed blood-letting because everything in the society around them (ancient authorities, the scientific and medical theories, doctors, etc.) told them it was the thing to do when you were sick. And if you don’t know germs exist, how would you know health is not a product of your four humours remaining in balance? Context is generally what gets forgotten in a straightforward, linear tale of history, but it is context that makes the story interesting. Why did Kepler come up with the Second Law of Planetary Motion? Not because he knew it would be a good basis for Newton to start his calculations on! (Really, Kepler’s theories were weirdly connected to his ideas of theology, but I won’t get into that.)

So there you have it, 2 Myths About History, Refuted. Now you know more about history than you did before. And maybe something about the wild, woolly world of the past sparked your interest. (After all, “the past is a foreign country: they do things differently there.”)

Filed under History, Randoms & My Life