Three Posts (and Books) Worth Reading

Blogs are supposed to end the year with a top-ten list. Looking back over my year, I realized there are a few posts whose messages really are worthwhile, but I don’t feel the necessity to list ten of them. Here are three, in the order of popularity:

You Might Relate to Mary Bennett, but You’re Not Supposed to Imitate Her
This is a post about a one-trait character showing all the reasons you shouldn’t be a one-trait character. As I said in this post, I myself have a tendency to view intelligence as my defining characteristic, but I found a remedy for that this year. Find people more intelligent than you! Let this post convince you of the necessity of being a well-rounded person.

Out of the Silent Planet Awoke My Imagination – Let It Awake Yours Too
This is a post about how I should not have enjoyed Out of the Silent Planet, but I did. It breaks some of the cardinal rules of fiction, and still manages to blow your mind.
If you’re on the fence about reading C.S. Lewis’ Space Trilogy, let this review convince you. And if you’ve read it, let me know whether you agree!

Have a wonderful New Year!

Tagged as Mary Bennett, Out of the Silent Planet, The Lion the Witch and the Wardrobe, top ten

You Might Relate to Mary Bennett, but You’re Not Supposed to Imitate Her 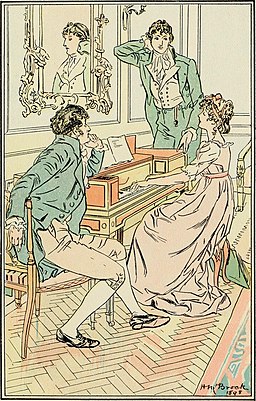 Mary Bennett gets a lot of good press. In Pride and Prejudice, she’s one of heroine Elizabeth Bennett’s three younger sisters, and she’s described as the bookish one. Maybe because readers of Pride and Prejudice tend to be bookish as well, we tend to feel the story overlooks her, and write multiple blog posts and articles and sequel novels bemoaning this. This is in spite of the plentiful evidence Jane Austen herself did not like her. Despite her being bookish, Austen did not mean to point to her as a character that we should imitate.

This is astonishing, as the bookish girl is a pretty strong stereotype for female heroines by now—just think of Belle in Beauty and the Beast, Hermione in Harry Potter, and Jane Eyre. All of them readers, some a bit know-it-all, but all with a heart of gold. The character of Mary Bennett is swimming directly against the current in this matter.

And readers relate to Mary Bennett—we know what it feels like to be ‘plainer’ than those around us, to feel less intelligent even though we’re desperately trying to appear smart, to be more than just a background character in someone else’s story. Who can’t relate to wanting some distinction of your own, even if it’s not beauty? We like books about bookish characters proving themselves because we’re reassured that our bookishness will not be our undoing, and that someday those that laugh at us in real life will agree our bookishness has value. But Jane Austen does not give us that satisfaction with Mary.

Evidence of dissatisfaction with Mary’s story can easily be found. Both The Guardian and The Atlantic wrote articles last summer about the proliferation of sequels about Miss Mary Bennett (including The Independence Of Miss Mary Bennet, The Forgotten Sister: Mary Bennet’s Pride and Prejudice, The Pursuit of Mary Bennet: A Pride and Prejudice Novel, and of course, one called There’s Something About Mary, Bennett.) Many, many authors have seen potential in her character, and clearly many readers want to read about that potential.

So what are Mary Bennett’s faults, according to Jane Austen?

“Mary had neither genius nor taste; and though vanity had given her application, it had given her likewise a pedantic air and conceited manner, which would have injured a higher degree of excellence than she had reached.”

And despite in other places defending the reading of books and applying oneself to improving oneself, Austen never vindicates these aspects of Mary. She really doesn’t do much with her character plot-wise, and appears to argue her way of being is just as ‘silly’ as Kitty and Lydia’s way of living. Mary does not get a character arc or much development at all. She has no romantic events come her way either.

I don’t think Jane Austen was against bookish girls. I don’t think she was subtly fighting against education for women, or against women having an opinion. I think she had a more complex idea here.

In reality, what Jane Austen is trying to show is how one trait, overemphasized and over-developed, can be ridiculous. You can’t have a personality that relies on only one characteristic—you need to develop your whole personality.

It’s kind of amazing how, despite all of Mary’s deficiencies in beauty and intelligence, her self-absorption is still derided as vanity by Austen. This is an important point! We like to think if we haven’t been given all the advantages other people have, we’re protected from vanity. We’re given a free pass to focus on ourselves, because after all, we aren’t as advantaged as everyone else. People should recognize and encourage us in what we do have.

However, this very lack of humility can prevent improvement in the areas we might have relative strength in! It’s Mary’s air of condescension and pedantry that makes her sisters dislike her speeches more—no one likes to be talked down to. Her piano-playing, while better than some, is less pleasant to listen to because of how conceited she makes it sound—she all-too-aware she is more skilled than Elizabeth. Her vanity in these things prevents her from using her gifts in a way that would actually give pleasure to other people (as Elizabeth proves you can give some pleasure to a listener even without being the best piano-player ever). And her vanity likely prevents her from even seeing the ways her gifts fall short of what she thinks they are. She doesn’t improve in the areas of attitude and mannerisms because she doesn’t think she needs to.

Does this mean she deserves to be laughed at by her sisters, or shamed by Mr. Bennett at the Netherfield ball? Of course not. I think Mr. Bennett’s treatment of her, in particular, is meant to short his shortcomings as a father and his insensitivity to what might improve his daughters’ characters. As he has with his wife, he’s basically given up on them, and endures their silliness instead. Now, if Mary actually is meant to have a character arc, perhaps one of Elizabeth’s or Jane’s attempts to rein in their younger sister’s vanities would sink in. As it is, we as readers as only left with the impression her vanity leaves on us, with the implication it is a warning—do not get so consumed in creating your own space for your own gifts that you blind yourself to how useless they are to anyone outside yourself. This is basically the opposite of every ‘find yourself’ novel released today.

So perhaps for us bookish types, we can take the message that there’s nothing wrong with being bookish, but it’s our attitude to others as a result of that can be the problem. Even if others don’t understand us, it doesn’t give us justification to feel superior to them. Even if we are actually better in one area than someone else we know, rubbing that in everyone’s faces will not help anyone else, and can even be destructive to ourselves. And I don’t mean this to lecture everyone else–I know I am prone to rely on my own intelligence and knowledge as my number one characteristics when relating to other people.

But then again, this is not meant to be the main message of the novel—Mary is merely one of dozens of Austen side-characters that demonstrate how one over-developed characteristic renders one ridiculous. It’s Darcy and Elizabeth who get character arcs, and who change throughout the novel. Austen uses their story to tell her message. Though if you look at how Austen takes down her main character’s characteristics of ‘pride’ and ‘prejudice,’ maybe Mary Bennett’s characterization does support the overall theme of the novel after all.

What about you? Do you find yourself with a lot of sympathy for Mary Bennett, or do you find her tiresome (as her sisters did)? Was Jane Austen too harsh on her?

Want more posts like this? Sign up for my author newsletter for a deep dive into faith, life, and literature.