How a Non-Existent Word Got in the Dictionary

Last Friday, we have some fun looking at potential new English words, and how the English language is changing. Since then, I ran across the delightful story of the non-word ‘dord,’ a word you’ve probably never heard of – because it isn’t actually a word. But for eight whole years it was included in Webster’s New International Dictionary.

‘Dord,’ the entry read, ‘n, Physics and Chem. Density.’ But it wasn’t until eight years later that editors at the dictionary realized that neither physicists nor chemists used any such word for density. What actually happened was that someone suggested ‘D or d, cont./density’ be added to the dictionary to show that the letter ‘d’ could also be an abbreviation for density. Somehow, ‘D or d’ was misprinted as ‘Dord’ – and so you see, children, spaces are important!

The adventures of the non-word ‘dord’ illustrates two things:

1.) Making up a new word involves a lot more than coming up with the string of letters itself. (If it were that easy, ‘prevening‘ would probably be a word.) You actually have the much harder task of somehow getting a large number of people to use the new string of letters for a long period of time. This is probably why a lot of ‘new words’ people dream up crash and fail, rather than enriching our English language.

2.) Just putting a word in a dictionary does not magically make it a word (except maybe in Scrabble). Words need more than just a definition, they need a backstory, and a lot of people who know the word and use it, to actually be a word.

I suppose I could add one more thing, a number 3.) Isn’t it great that we have people whose job it is to check over the dictionary? Think how many more non-words people would claim to be words if dictionaries were not systematized and well-edited.

I like the sound of ‘Dord,’ though, and I share the lament of the one of the dictionary editors who said, taking out ‘dord’ was “probably too bad, for why shouldn’t dord mean ‘density’?”Are there any other interesting non-words that you’re aware of?

Just to update you on my story ‘One House, Six Decades – Three Generations‘ over at cbc.ca/hyperlocal – it was recently selected as a ‘Editor’s Pick.’ Thank you to all who read and ‘liked’ it so far!

Why Worry if You Can’t Spell in English?

– an alternate spelling of the word “fish,” usually attributed without evidence to George Bernard Shaw. Possibly thought up originally by William Ollier Jr.

How on earth can “ghoti” be an alternate spelling of the word “fish?” Well, if:

Of course, as the New York Times pointed out, most English speakers would never pronounce “ghoti” that way. “Ghoti” likely originated in a Victorian parlor game where people stitched together new spellings of words from other words – nicely illustrating the complete irrationality of English spelling in the process. Doesn’t it sound like people had fun back then? Another fun result of this game was a possible 81,997,920 ways of spelling scissors (because, when you think about it, why would you spell “scissors” the way we do? What exactly is that “c” there for?)

So when you struggle over whether “embarrassment” has a double “r,” a double “s,” or BOTH a double “r” and a double “s,” don’t feel so bad. English spelling really doesn’t make sense, and smarter people than you have failed to figure out a system for it.

(PS: George Bernard Shaw was a strong advocate of spelling reform in English, which is probably why this quote is often attributed to him.) 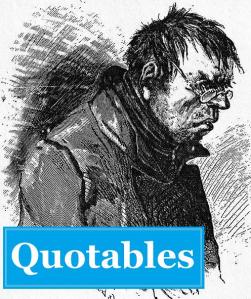 “The view of language as a variable system is at odds with the notions expressed in traditional grammars and adopted by teachers who insist that there is only one “correct” way to speak the language… Though unsupported by any scientific evidence, such notions are propagated by a host of self-appointed language arbiters who proffer inept advice on matters of correctness and find errors where a bona fide language specialist would find none.”

I’d rather write the way people actually use the language, rather than worry about being “grammatically correct”. Clearly, you’ve got to follow grammar most of the time, or risk being incomprehensible. But pretending that people don’t break grammatical rules all the time in everyday speech, insisting we remember grammar rules that people stopped following fifty years ago, or acting like the rules are hard and fast when they’re really just pragmatic things, is stretching it a bit.

When I was in Brazil, one of the Brazilians who spoke English asked if it was more correct to say “lie in the grass” or “lay in the grass.” None of us knew off the top of our heads. He was like, “You guys speak English and you don’t even know???” But it just goes to show most people don’t really care about whether they’re using the words correctly, or even think about grammatical rules, until the rare moment that they’re faced with an academic paper or have to meet the Queen.