Not My New Year’s Resolutions 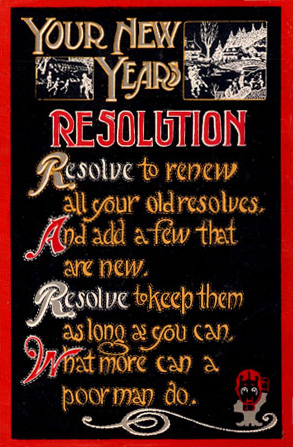 I’ve never believed in the whole goal-setting thing as much as I should believe in it. (I’ve been told I must set goals or fail at life since elementary school, and when people phrase things like that I have trouble believing them). It doesn’t help when goals you have set – eg: finishing nursing school – just don’t happen.

All the same, I’m going to set a few goals for myself. Not as a New Year’s Resolution, but goals for myself as a writer. And not the usual sort of goals either (publish a novel by the time I’m thirty, become famous by forty-five, write my memoirs for my adoring fans when I’m seventy…) No, fun goals! Fun goals, as in fun side projects to do with writing that probably are a distraction from my main goal of getting people to read my novels someday, but which are too fun to give up doing anyway. After all, if writers aren’t having any fun, readers probably aren’t either.

These two goals are:

1.) Write a play and see it performed

The first one I’ve sort of already done – if you count ripping the dialogue from your favourite novel, making it a play, and performing it with all your friends for a Talent Evening. I did that in elementary school (it was based on a Road to Avonlea book, very Canadian). But I’d like to write an original one that’s clever and witty. I know writing a play is far, far difference from writing novels, so I expect to fail at this at first. But hey, failure is part of life, and I might get it right in the end.

I don’t why I’m so fascinated with writing graphic novels, since I can’t quite wrap my brain around reading them. I’ve tried, but I guess I’m too used to imagining the scenery myself. But I think it’s the way the art interacts with the writing – I have a secret love of design, though I don’t know if I’d ever be any good at it because I picked writing instead. However, in graphic novels you get to work with an illustrator! I’d love to write a story that can be artistically represented. I don’t think I’ll ever have the skills to do the artwork, but a collaboration would be fun.

Strangely enough, both of these goals are pretty dialogue-heavy. I must like writing dialogue, or something.

Anyway, now that I’ve revealed these, I’m not promising I’ll get them done this year. They’ll probably take a lot of time. But feel free to hold me accountable to keeping these goals sometime in my lifetime.

What about you – do you have a goal for the New Year? Do you set goals or not?