Writing Reality – Or Escaping It

A quick thought for today:

Writers write what’s real. They try to connect with some reality in the readers’ experience, and inspire emotions that complement the work they write. They try to represent the world as it truly is. That is one theory of writing’s purpose, anyway.

The problem is, reality really bites.

I wanted to improve as a writer this year. I gritted my teeth and tried to dredge up something of reality – bad experiences as well as good (though I’d be the first to admit my own real problems may barely phase anyone else.) I wrote down some stuff that for me was ‘dark.’

Then a lot of awful stuff happened in the world (some of which is obviously in the news, and some of which is just learning things about people you never wanted to know.) Then my ability to capture the true darkness in words falls so far short.

Because it’s so hard for me to face the depths of darkness. And I don’t want to do it.

Some writers can – dive into the depths of evil and show it for what it is to the world. And this is important. But is it what I – who shrinks from true evil and know its true strength is far beyond my own- am meant to do?

Then I escaped into the movie Casablanca – a fictional world which pretends to represent reality but in actuality stereotypes and simplifies it – and was drawn in. The story took me away. It ended on hope.

And now I believe there can be two types of creators/writers – those who don’t flinch from portraying problems and showing the ugliness of reality. And those writers who help escape from reality, and use fiction to remind us what it’s like to hope.

In real life, Harry Potter may’ve never escaped his cupboard. He may’ve been abused his whole young life, or been so psychologically scarred he could never function in any world. Frodo might’ve never gotten out of Mordor. Elizabeth Bennet would’ve end up penniless and husbandless, dependent on the mercy of Mr. Collins in her old age.

But, instead, these stories provide hope and escape, and show me a way to touch on reality without giving into the full terribleness of it.

What do you think?

No Thanks, to the Guy Reciting Poetry Under My Balcony

Or, Romantic Reality vs. Fiction 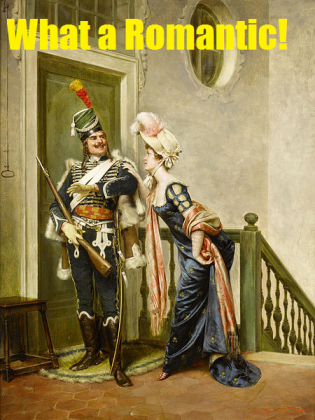 If some of the things that happen in romance novels happened to me in real life, I’d probably run the other way. It might make sense in the tightly structured, well-plotted world of the novel, but in the messy real world, not so much. After all, real life doesn’t have a plot, and it has far more dead ends and far less plot armour.

Take love at first sight. It never made sense to me that Romeo and Juliet could be madly in love after a few dances at a ball and a chat on a balcony – enough to run off and get married at the ripe old age of thirteen and twenty-ish, respectively. Here everyone is screaming at me that it’s fiction, and written by Shakespeare on top of that (and of course you have to be a literary genius yourself if you even dream of criticizing Shakespeare). But okay, I’ll go along with this story as long as I have a healthy suspension of disbelief. If, in real life, a guy proposed marriage the day after he met me, I’d freak out. (He doesn’t know anything about me yet! What crazy idea of me did he get into his head that convinced him I should be his partner for life?)

Then there’s the things the romantic hero does for the girl in these books. The worst example here is Twilight, of course. I’d never, ever, ever want a guy standing by my window watching me sleep, before I even had an inkling that he liked me. Yet somehow, because this is fiction, girls all over the world have called this ‘romantic.’ I disagree, but only by limiting such actions to a fictional world can anyone even make the argument that it is romantic. After all, in fiction the heroine can be reasonably sure the guy is actually ‘good,’ because up until that point he’s been hitting all the plot points that mark him out as the romantic hero. (In real life, you wouldn’t be waiting to see if he has a good heart or not, you’d be calling the police). Also, because she is the heroine, she can be reasonably sure he’s not going to murder her in her bed – that’s what I meant by ‘plot armour’ in the first paragraph. If it’s a tragedy, he could possibly murder her at the end, but considering this occurs halfway through the book, and the girl is our main character and point of view so far, it isn’t likely he’ll murder her now. So readers who enjoy this kind of thing can make the argument that in this particular fictional situation, these actions are ‘romantic.’

But my main point is this: some things that in books make me go awwwwwwww, would make me feel horribly uncomfortable and awkward in real life. And this is okay, as long as you recognize it – fiction is not real life, and awareness of the gap between the two is essential (otherwise you’ll be wishing to live in a dream world). And it’s good for authors to know this too. Some things that sound ridiculous if they were to happen to you today, may very well be the perfect addition to your story. Fiction, after all, is all about exaggeration.

In real life, I’d want a guy to do stuff that shows he thinks about me and cares about me, but not to go over the top. Not to do something crazy to prove to the whole world how WONDERFUL our relationship is, and how utterly devoted we are to each other. Fictional relationships are three-way relationships, with the couple mainly performing actions for the benefit of the reader. The characters have to exaggerate in fiction, to bang into the poor reader’s head that this is ‘true love.’ But in real life, I’d hope we wouldn’t have to put on a show for anyone. It’s enough that just me and the guy I like know.

Those are my thoughts on reality vs. fiction in romance – what’s yours?