Writing the Tragedy – As Hard as Living It

The place my writing comes from inside me is dead right now. Probably not permanently, but dead for now.

I’ve always thought of writing – and reading – as a kind of escape from reality. I’ve blogged about this more than once. There’s a contrary theory of literature that says the good stuff comes from the bad experiences – the emotional turmoil – the realization that reality actually is incredibly ugly.

This theory may be right, but I don’t have enough distance from the ugliness to put it in words yet. Maybe I never will. And I know the joy in the escape from reality will come again – I still feel it pulse inside me – but I can’t create any escapes on my own at the moment.

I look forward to the day I rejoin the writing world.

Writing Reality – Or Escaping It

A quick thought for today:

Writers write what’s real. They try to connect with some reality in the readers’ experience, and inspire emotions that complement the work they write. They try to represent the world as it truly is. That is one theory of writing’s purpose, anyway.

The problem is, reality really bites.

I wanted to improve as a writer this year. I gritted my teeth and tried to dredge up something of reality – bad experiences as well as good (though I’d be the first to admit my own real problems may barely phase anyone else.) I wrote down some stuff that for me was ‘dark.’

Then a lot of awful stuff happened in the world (some of which is obviously in the news, and some of which is just learning things about people you never wanted to know.) Then my ability to capture the true darkness in words falls so far short.

Because it’s so hard for me to face the depths of darkness. And I don’t want to do it.

Some writers can – dive into the depths of evil and show it for what it is to the world. And this is important. But is it what I – who shrinks from true evil and know its true strength is far beyond my own- am meant to do?

Then I escaped into the movie Casablanca – a fictional world which pretends to represent reality but in actuality stereotypes and simplifies it – and was drawn in. The story took me away. It ended on hope.

And now I believe there can be two types of creators/writers – those who don’t flinch from portraying problems and showing the ugliness of reality. And those writers who help escape from reality, and use fiction to remind us what it’s like to hope.

In real life, Harry Potter may’ve never escaped his cupboard. He may’ve been abused his whole young life, or been so psychologically scarred he could never function in any world. Frodo might’ve never gotten out of Mordor. Elizabeth Bennet would’ve end up penniless and husbandless, dependent on the mercy of Mr. Collins in her old age.

But, instead, these stories provide hope and escape, and show me a way to touch on reality without giving into the full terribleness of it.

What do you think?

Is Rebellion Necessary for True Art? 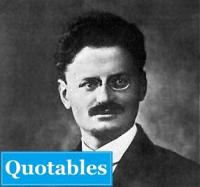 “Generally speaking, art is an expression of man’s need for an harmonious and complete life, that is to say, his need for those major benefits of which a society of classes has deprived him. That is why a protest against reality, either conscious or unconscious, active or passive, optimistic or pessimistic, always forms part of a really creative piece of work. Every new tendency in art has begun with rebellion”

Whoa, here I go quoting Leon Trotsky, of all people! Don’t worry, I haven’t turned into a Marxist/Trotskyist/whatever-type-of-communism-is-currently-fashionable. I’ve always resisted the idea that art is always about rebellion, while at the same time always maintaining that an escape from everyday reality is an important part of enjoying good art or good writing.

But what Trotsky is saying is that this act of escape is, in itself, a rebellion against current realities. I don’t like the idea that all art is rebellion because not everything needs to be rebelled against, or is worth rebelling against. Sometimes the good can be celebrated too. But most art does point to something lacking in the human reality, even if it’s just in a tragic way (like The Great Gatsby – I just watched the new movie version, by the way!)

So can art be an expression of what reality is lacking? Definitely. Does that mean art is rebellious, since it is pointing out the flaws in reality? Well then, maybe there is an aspect of rebellion to all art after all.

Here’s what I believe, in the end. Humanity is looking for a harmonious and complete life. But the barrier to gaining that kind of life is not class divisions, as Trotsky says above, but ourselves. All of our individual stupid shortcomings and flaws, repeated on a grand scale throughout the whole human race, resulting in everything we know is wrong with the world – war, hatred, evil.

Sometimes we need an escape from this kind of petty reality. Sometimes we need to use art to point it the bad stuff. Either way, creativity and artistic production is important for humanity.

What do you think – does art have to have an aspect of rebellion to it? What should art rebel against?
On a related note – ‘Something Like Friendship,’ Chapter 5 of my Why Polly? serialized novel comes out today! Click here to check it out. Or you can read Chapter 1 free here.

Filed under Creativity and Art, Quotables