How to Cook for a Celiac: A Simple Guide 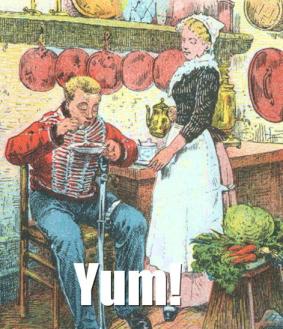 A soldier in the kitchen with his sweetheart, a cook. {{PD-old}}

This post is slightly tangential – how to cook for celiacs – because I wanted a nice, easy explanation that lays down the basics about what you need to know to do this to be available online. Don’t worry, with your newfound knowledge of celiac disease, you can go and make your next main character have it (or another allergy), just to spice things up. After all, allergies and intolerances are a lot more common nowadays, and many readers can relate to it!

The other reason is that blah days come around every once in awhile, and they make it hard to write.

How to Cook for a Celiac*

So, I know some people are intimidated by cooking for people with celiac disease, so I thought I’d break it down and make it less intimidating.

Disclaimer: Not ALL Celiacs are the same. Some could have additional allergies to corn or dairy or whatever, which they’ll hopefully tell you before you try to cook for them. Also, some celiacs cheat on their diet all the time, and others are horrified by the very thought of it, so if you want to be on the safe side I’d assume your dinner invitee would never dream of cheating. Much less chance of making anyone sick that way.

1.) What to cook? Well, almost anything that looks whole and natural should be okay. I’m talking about whole potatoes, veggies, chicken, beef, fresh herbs, and rice (of course, rice). Unless it’s whole wheat/barley/oats you grabbed from a farmer’s field for some reason. But other than the obvious, most things that are fresh and whole are fine. (For example, you want to make a Christmas dinner? Turkey, potatoes, green beans, salad veggies by themselves are all perfectly edible for a celiac).

–         In addition, anything in the store that say ‘Gluten Free’ is okay, obviously. The tricky part is, not everything that says ‘Wheat Free’ is okay, so if in doubt, don’t buy.

2.) Any time you want to add something pre-packaged to your meal, stop! Any sauce, gravy mix, taco seasoning, salad dressing, cans of soup, etc. could contain something a celiac can’t eat. If it looks like something put together in a factory, be careful. Before you add it, read the ingredients, and if you still aren’t sure, phone your celiac friend and read the ingredients out to him or her. They’d rather be phoned than eat gluten, so don’t worry. And honestly, we’d rather eat bland food than eat gluten too, so it’s perfectly okay to leave the seasonings out, too.

–         Ingredients on packages that a celiac can’t eat: wheat, barley, oats, rye, malt, hydrolyzed vegetable protein, and “seasoning” (if there is no explanation for what is in the “seasoning”).

–         Nowadays many packages say: WARNING, may contain gluten/wheat, so that’s helpful. Don’t use the ones that say that.

3.) Okay, you’ve figured out all your ingredients. Next, look at where you plan to cook this food. Those breadcrumbs sprinkled on the counter are suddenly a hazard, so just wipe those surfaces down. If you think your pans are too coated in crusty bread sauce or something, maybe use a clean pan (but you’d do that anyway, right?)

–         Just remember what utensils you use as well – if you stirred a pot of regular spaghetti noodles with a spoon, don’t use the same spoon to stir the rice for your celiac friend.

Whew, that looks like quite a process! Actually, cooking for celiacs is pretty much the same as cooking for anyone else – the only difference is you are more aware of every ingredient and step you take to cook. People always ask if being a celiac is hard, and it isn’t really. Once you adjust to being aware of every thing that you put in your mouth, you realize it’s better not to be mindlessly eating everything you see, anyway.

Conclusion: Pretty much, you cook what you usually cook, except you double-check all pre-packaged seasonings and sauces. Leave out the bread, wheat pasta, soya sauce, etc., and your home-cooked meal should be delicious!

What about you – any food issues that challenge you when you want to eat?

* Some people have never heard of Celiac’s disease. Well, that’s fine! That’s what this little asterisk is for. Celiac’s disease is a condition where your body has an inflammatory reaction to even the smallest speck of gluten (which is in wheat/barley/oats). This inflammatory reaction shows itself in different ways in different people – some throw up, some get itchy, some never feel a thing – but no matter what their symptoms are, their insides are being affected. Badly. The nice thing is, there is a “cure”: Avoid all wheat/barley/oats for the rest of your life, and celiac disease shouldn’t bother you at all.